Better lights for the Chott

Desperate for some extra lumens during the night sections of long distance trials like the Lands End, I have fitted a modern headlamp – which takes H4 bulbs. 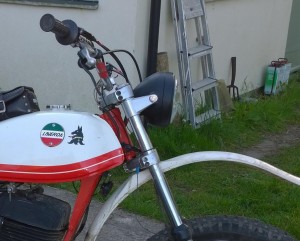 Problem is, alternator produces 55w in total so a standard bulb (55w/60w) would drain the standard battery in no time. I have a bigger capacity gel battery I use for events, so there is some scope for draw-down (is that a term?) as long as I don’t ask too much of it.

Some small Japanese sports bikes – namely the ZXR400 Kawasaki – had 35w/60w headlamps! So I ordered a couple of these bulbs having been assured that they were standard H4 fitments. Guess what? Ever heard of H4R bulbs? Nor me. Same three terminals as an H4 and same overall dimensions, but the two bottom lugs that locate the bulb and stop it falling forward into the reflector are in slightly different positions. 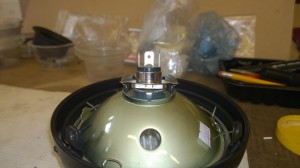 These bulbs annoy ZXR 400 owners for precisely the opposite reason – they want a full 55w on dip but can’t fit H4 bulbs to their H4R bulb holders. But their answer provided me with a solution to my own (inverted) version of the same problem. Since the top tab prevents the bulb from rotating, the bottom tabs only really prevent it from falling into the bowl – so why not snip them off and replace them with something else in the right position? In my case I soldered on a straightened stainless split pin.

It ain’t a thing of beauty but it works. 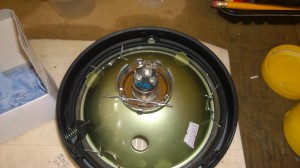 Since the oomph for a 60w main would probably melt my old handlebar switch in a jiffy I have also run the main beam circuit through a relay hidden in the headlamp shell – but forgot to take any photos.

Posted under Uncategorized
Comments Off on Better lights for the Chott