Or … ‘In praise of the good people of Barbrook, Devon.’

What are these? They are the end of my Lands End Trial, that’s what they are. 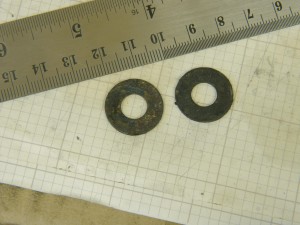 At some hard-to-determine time between 3am and 6am on Saturday multiple punctures brought my LET 2012 to a complete halt with just two sections and two tests under my belt, and eleven more to go.

I’d had to replaced my rear tube within a quarter of a mile of Bridgwater Control. The rough stuff was still 30 miles away, and I had done nothing more exciting than accelerate gently away from some traffic lights. With no sign of a nail and so little provocation, I should have realised then that the puncture might point to something seriously amiss inside the rear tyre. But, having wrestled the tyre on and off single-handed using six-inch levers, I just took a deep breath and got back on.

By the first section, Fellons Oak, I was already almost two hours behind schedule. Last time (in 2010) I’d made a complete hash of this section by forgetting the restart. This time it went perfectly, or so it seemed from the saddle.

The new route box worked fine … as long as it wasn’t properly dark. In and out of the street lighting everything seemed to work well, but once in the deep darkness of the woodland around the first special test I realised that I had created just as big a problem as last time, only the opposite. In 2010 I had too little light, now I had far too much. The box was so bright that every time I glanced down it ruined my night vision ahead for what seemed like half a mile. By the time we were up on the moors, shrouded in mist and light rain, I was reduced to riding one-handed, using the other to shield the glare from the LEDs. 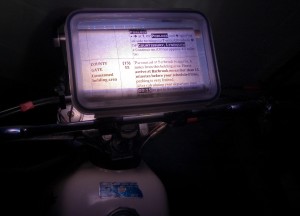 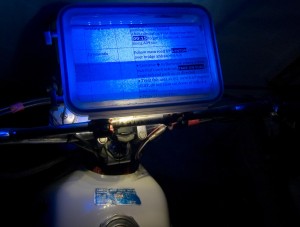 At the Barbrook control I was exactly 2 hours and 2 minutes late. The time-keepers gave me 30 minutes to gather my wits before Beggars Roost. By turning the white LEDs upside down, the route box now glowed gently blue while the Laverda’s beautiful tank was bathed in bright white light. A picture probably visible from space. If this didn’t do it I would simply disconnect the white LEDs.

Beggars Roost rises up out of Barbrook. As you wait your turn the slope is so steep that it’s a struggle to stop the bike from slipping backwards even before you move forward to the start line. Obviously what happened next can be explained primarily in terms of the competence of the pilot, but perhaps we can leave that to one side for a moment. I realise now that I had made a couple of rookie errors that were about to make BR very hard indeed and to conspire to rob me of my dignity.

Firstly, fearful of another puncture, I had left too much air in the rear tyre: 11psi instead of 5-ish. Secondly, fearing the effects of long road miles on a low geared 35 year-old two stroke, I had raised the gearing slightly to calm things down at road speeds. Now as I tried to take away I was having to use too many revs in the slippery conditions and was finding nowhere near enough grip with my over-inflated rear – or at least that’s what I thought was happening back there.

Many thanks to the marshals who helped me pick up my bike – twice within the first five yards. But worse was to come. At the top I found the rear flat as a pancake once more. My problem hadn’t been too much air after all, but too little.

After 15 minutes of agonising I walked the bike the mile or so steeply downhill back into Barbrook. My race was run – or so it seemed. I’d already used my spare tube and hadn’t thought to bring a  puncture repair kit as well. Almost immediately I was offered help in the form of some extra tools, a spare pair of hands and a bicycle puncture repair kit (a thousand thanks Phil.) With the bike back on its side and the wheel out we tried repeatedly to stop the leaks, but after an hour and a half had to accept that the tiny patches and old glue would never hold – or might we not yet have found all the holes! All the bikes had now gone and the cars were arriving in numbers. Perhaps they would have a puncture repair kit man enough for the job? A bit of pleading along the tea and buns queue produced patches (many thanks whoever you were) but no glue, so we set to using a fresh tube from another cycle repair kit. Someone suggested putting the tube inside the tyre before inflating it (to give it more of a chance to set) so I did, thus ensuring another 15 minutes of fruitless hard labour when it failed, immediately. At 5am a light but relentless rain set in. I should have done four more sections by now and be filling up at Goosham..

I am on my knees, again, gazing disconsolately at my Laverda, lying on its side on the grass, it’s rear tyre open to the world and two tubes which will not mend sneering up at me. How am I even going to get home? Then a voice from above: “Need a hand?” The voice belongs to Chris Jenkins, who, along with his brother, competes in long distance trials (though not this one) and so has a fine collection of spare tubes and (oh joy!) proper long tyre levers. As I sipped tea brought by a kindly marshal Chris had the pleasure of installing two tubes in my jinxed rear wheel (yes, the first one got pinched by a lever in the fitting) and as the birds started to wake up I dragged my tyre to the air line at Barbrook filling station for the last time. Half an hour later I was packed up and waving goodbye to Chris, his brother and his mum. Great people all.

The trip home which was mercifully uneventful given what I found inside the carcass when I removed the tyre in the dry and with good light. 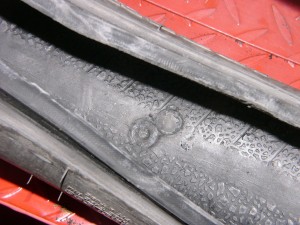 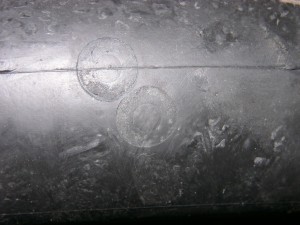 Two M8 washers must have come off the rim locks last time the tyre was changed and got left inside. That must have been before I bought the bike as I’d never had cause to remove the tyre until my first puncture at Bridgwater. As long as the tyre was fully inflated for the road the washers were pressed tight enough against the tyre carcass that they could only do their evil work very slowly. But as soon as we were down to off-road pressures the little blighters were free to roam about wreaking havoc. 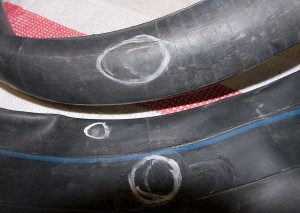 Old hands will say that I should have checked inside the tyres as part of my routine prep of a new machine. Half an hour with tyre levers in the comfort of the workshop would certainly have saved an ocean of grief by the side of the road in Bridgwater and Barbrook. Needless to say, I have had my rear tyre on and off several times now as ‘practice’, and as part of my prep for the 2013 LET I have just had the front tyre off too for a precautionary look-see. Oh, and I’ve bought a cracking puncture repair kit.