I brought the 2TR from Cheshire in a tiny weather window at the end of November when the west side of the country was still virtually snow free. We loaded her up with thick snow on the ground. For four hours I dreamed of riding the Laverda to the rescue of snow-bound maidens on Bodmin Moor, but in fact I hardly saw another flake for 350 miles –  until, that is, the last 2 miles. Our lane was impassable for a van, and unloading a bike, on ice, in the dark, would have been folly. I left the Laverda tucked up overnight in my brother’s heated garage in town and rode her home through four inches of snow the very next day. I can’t say that that six mile ride taught me very much about my new steed, except for one thing: the gearing was way too low for an event like the LET, in which the plentiful off-road sections are connected by some very long road rides. The Cornwall start at Plusha, near Launceston, is 90 road miles from the Bridgwater collecting area. Revving the guts out of that lovely little bike at 50mph, hour after hour?; my mechanical sympathy just would not let me do it. Anyway, even a brief ride had revealed room to raise the gearing for the road without spoiling the bike’s off-road hill-climbing abilities. 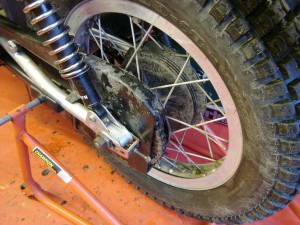 The 2TR has a fully enclosed drive chain, which is a very good thing indeed, generally speaking. Tales of enclosed chains and sprockets blessed with immortality are legion in certain quarters. The picture shows it with the rearmost cover (for chain lubricating, retained by just two small screws) already removed. Enclosure does make an otherwise simple thing like checking/changing your gearing a bit more complicated though. But since the rear sprocket housing was clearly in need of some cosmetic TLC, disassembling the whole hub was hardly an extravagance.

The handbook reveals that 2TR gearing options are many – 13, 14 or 15 teeth at the gearbox; 38-45 at the rear – but the standard combination is 14/40. Laverda Club specialists will tell you that a 15-tooth gearbox sprocket will do damage to your casings in the end. I am not about to test this lore (yet), so it’s a 14 on the front for me. Turning to the rear (so to speak), I find a 41! A tooth lower than standard. So I ordered a 38 from the ever-helpful Jane at Sprockets Unlimited, and up it turned in half the quoted fortnight.