I nearly named this blog after Omobono Tenni (pictured left), but thought better of it. His story is a remarkable one and his hair, having so obviously grown under the influence of a perpetual sou’wester, was so reminiscent of Cornish hedge-top shrubbery that I felt he must surely be the patron saint of Moto Simpatico. But ‘Omobono’ as a blog title? A bit obscure, I thought. Postings by confused and angry U2 fans would surely flood in.

Omobono Tenni’s 24-year racing career straddled the Second World War. He made his debut in 1924 at the age of 19 in a lightweight race at the Circuito del Piave. At first he raced only occasionally, but from 1926 a series of epic home victories and a third place in the 1928 Swiss GP established Tenni’s reputation as a wild and fearless crowd-pleaser and brought him to the attention of the big factories. 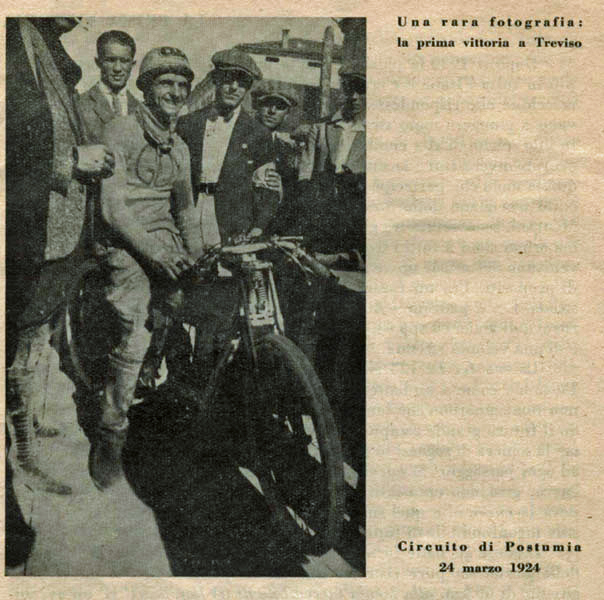 Between 1930 and 1933 he rode for a number of marques, including Velocette and Norton. Then, in 1932, he beat Moto Guzzi ace Pietro Ghersi at Rapallo and the following year joined the still-youthful Moto Guzzi factory. With Guzzi he would galvanise his reputation as il diavolo nero and in so doing embarrass and delight we British in our own back yard – the Isle of Man. 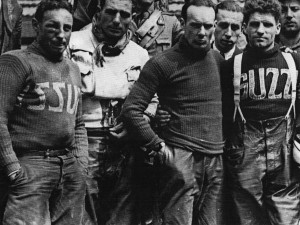 In 1934 Tenni became Italy’s national champion and won the Grand Prix of Nations aboard Carlo Guzzi’s brilliantly effective new 500 V twin, the bicilindrica; to all intents and purposes a pair of the immensely successful 250 singles mated at 120 degrees to a common crankcase. The following year Tenni won the Milano-Napoli race on a sprung version of the same bike, running at an average speed of 107kph. The picture above was taken after the Guzzi victory in the 1936 race: Tenni is far right, in braces, with his arm round Giordano Aldrighetti; Guido Corti, far left, has had such a tough race his jumper has been turned inside out, and so very nearly has his right eye.

1935 was also the year Tenni tackled the Isle of Man TT for the first time. He took to it like a duck to water. Cornering his 500 with “mad abandon”, digging chunks out of the scenery as he clipped the hedgerows with his handlebars, and taking to the ditch at high speed down Bray Hill, he left many a hardened TT spectator quite speechless. It was a famously great year for Moto Guzzi on the Island, with Stanley Woods winning both the lightweight race and, in what has come to be thought of as perhaps the greatest TT duel of all time, the senior. 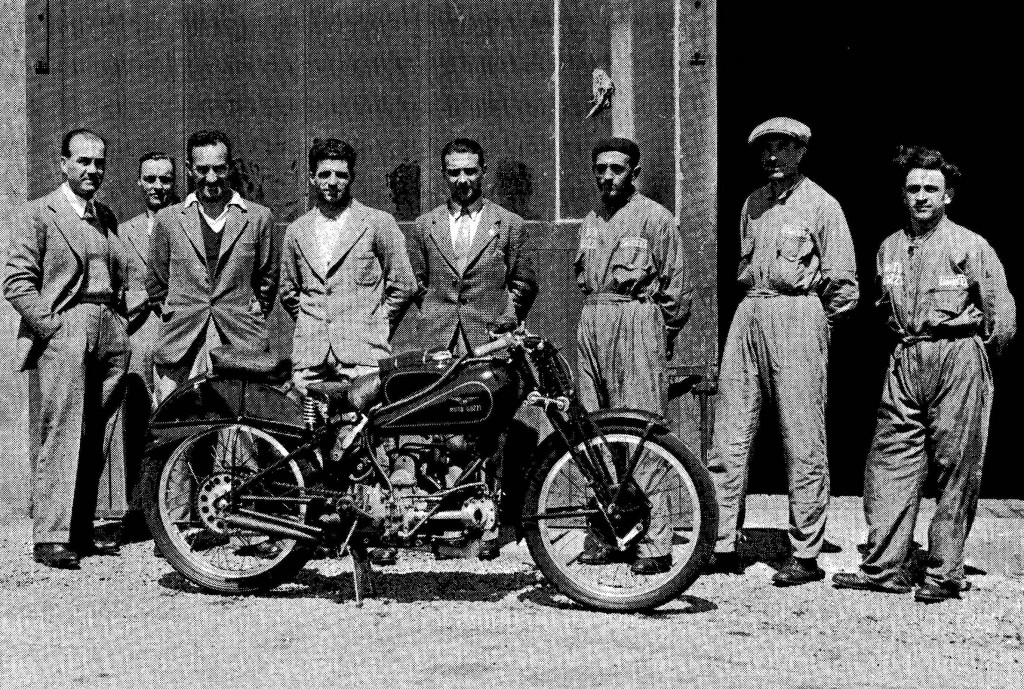 After more than three hours of racing, over seven laps of the mountain course (that’s 244.11 miles), just four seconds separated bicilindrica-mounted Woods from Jimmy Guthrie’s Norton. This wasn’t in the script. By the time Woods crossed the line the papers already had their pictures of Guthrie as the smiling victor, and officials were leading the brilliant Scot to the winner’s microphone.

Mussolini’s Abyssinian crisis kept the Guzzi factory too busy on war work to attend the 1936 TT, but in 1937 Tenni returned to make TT history in the lightweight race on his 250. Having slid off at Governors Bridge on the first lap, leaving part of his Guzzi’s exhaust by the roadside, he went on to win the three-and-a-half hour lightweight TT at an average speed of 74.72 mph. 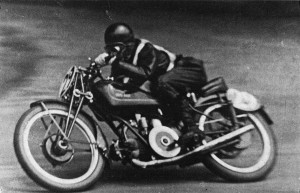 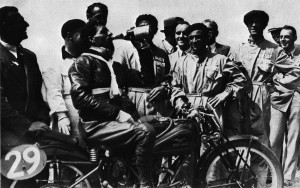 Tenni had become the first non-British rider to win a TT, and, to add insult to injury, he’d done it on board a non-British bike. Tenni became a father for the first time very soon after. Some measure of the significance of the win, both to Tenni and to the Guzzi team as a whole, must surely be evident in the name he chose for his shiny new son. Titino. Poor little chap.

[I am indebted to Mario Colombo’s marvellous book ’80 Years of Moto Guzzi Motorcycles’.]

Posted under Moto Guzzi,Pre-war racing
Comments Off on Omobono Tenni – our patron saint?